Room : based on 2 occupancies additional person charges at RM100 – max 3 occupancies (per room)

Built in the late 19th century, Seven Terraces was a contiguous row of Anglo-Chinese terrace houses located just behind the Goddess of Mercy Temple. The row of houses today is a sterling splendid example of an adaptive reuse of heritage buildings that were of low density and low impact.

Historically, these houses were a redevelopment of the original Lee Kongsi building circa 1893, in a period of time when George Town’s Kelly maps were just completed. The row was redeveloped by Koe Guan, the holding company of local millionaire and governor of southern Thailand, Khaw Sim Bee. This row was the first residential and commercial expansion by Koe Guan outside of the original settlement that bordered Pitt Street. Houses built by local property developers along Stewart Lane and Muntri Street at the end of the 19th century were the earliest examples of mass housing that were taller, more imposing and with significantly higher ceilings as compared to shophouses built in other parts of George Town earlier in that century.

The architecture of these shophouses, with classical decorative details imported from England, was similar to the traditional urban house models common in southern China. The five-foot-way, a covered walkway that connects these shophouses on the ground floor, was another feature at Seven Terraces that is characteristic of most heritage shophouses in Penang. This unique walkway represents a colonial adaptation designed to suit the tropical climate, providing a length of covered space as a shield from the heat and rain.

When you walk into these terrace houses, a distinctive feature of traditional Chinese architecture that strikes your attention and welcomes you was the open courtyards and air wells in the center of the houses. These were open-air spaces that function mostly as natural ventilation for the houses, allowing light and air into the interior rooms to keep the whole house well illuminated in the day and cool the whole day through. Usually, there will also be a second courtyard for the bathroom where rainwater was stored for use in the bathroom. The number of courtyards for each of these houses was relative to the length of the property. There were 200ft longhouses along Muntri Street that have as many as three open-air courtyards. These courtyards were paved with massive granite slabs that add character and warmth to the overall space. These granite slabs were recycled from the ballast carried by trading junks that unloaded the stones at the Penang port, at the end of their return journey.

At Seven Terraces, the shophouses were relatively shorter but still highly functional, with each measuring about 100ft in length and comprising an open-air courtyard, wherein the room proportions project a sense of wide living space. Today, the terrace houses have been cleverly transformed into spacious suites on the first floor, with two suites in each shophouse. The ground floor now becomes a public area where the reception, swimming pool, lounge and Kebaya Restaurant were all conveniently located.

Complementing the Anglo-Chinese exterior, the interior was one that harks back to the romance and splendor of the Peranakan Chinese era. Chris Ong was a fifth-generation Penang-born baba and the recreation as well as the curation of a grand Peranakan mansion symbolizes Ong’s way of paying homage to the grandeur of, and more importantly, contributing his part to conservating the legacy of the Peranakan Chinese culture.

Carved gilded decoration front doors facing Stewart Lane welcome guests to the interior, its amazing details and pristine condition offer glimpses to the days of opulence in a Peranakan Chinese household. Ong’s signature of clean, simple lines was apparent in the extensive restoration works done in these houses from the encaustic cement tiles to the salvaged wooden floor boards that make up the entire floor space upstairs.

Cast iron lace work and rows of slatted wooden screens which adorn the interior serve to introduce ornate details to the simple background while the antique furnishings and fittings placed in choice spots throughout the hotel stand out in stark relief, bringing guests back to a bygone era that is steep in culture and strong family bonds. Each room boasts of blackwood and mother-of-pearl inlaid furniture and gilded cabinets and tables. Ong’s personal collection of priceless antiques such as porcelain ware is also proudly displayed around the hotel. In one of the suites, The Steward (Stewart?) Apartment, guests will be delighted with the original Peranakan Chinese wedding bed and accompanying cabinets.

The suites facing the road are strategically shielded from street noise with full width bathrooms acting as a buffer. Most of the 18 suites in the hotel, all of which are spacious and airy, have mezzanine floors as the resting or living spaces.

Seven Terraces was located in the heart and core of the World Heritage Site which was a 20m away from Pitt Street. It was a short walk away from the ‘street of harmony’ heritage trail, in between the Goddess of Mercy Temple or Kuan Yin Temple and the St George’s Church, where one will find a church, temples, and mosques all within the same street.

It is also within a walking distance to stately British colonial mansions that used as public buildings with the Penang state museum right next to the St George’s Church and the Courthouse just across from it. Down the road, the stately City Hall and Town Hall stand proud and tall facing the Esplanade while about 300m from these grand old buildings was the Penang Legislative Assembly building. This was also just across the Fort Cornwallis, a historical monument next to the Esplanade facing the sea.

Two of the early missionary schools, Convent Light Street and St Xavier’s Institution, were also located in the vicinity of the Courthouse and the state museum.

Traditional crafts and tradesmen were plenty in this precinct with a joss stick maker just 10m away from the hotel while a songkok maker and also a signboard carver were all located nearby. Walking down the maze of narrow lanes surrounding the hotel such as Stewart Lane, Muda Lane, Market Street, Chulia Lane and Klang Road will provide glimpses into the local community that still lives in the heritage houses lining these streets.

Art enthusiasts will appreciate the abundance of street art and murals on the sides of the buildings and along the length of stretches of walls near the hotel.

Food, local hawker fare, and cafes were easily accessible along the main roads and narrow lanes all around the hotel. Just a stone’s throw away was Chulia Street, a haven of local hawker fare, eateries and watering holes for locals and tourists. 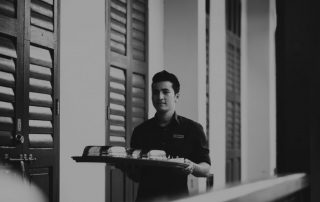 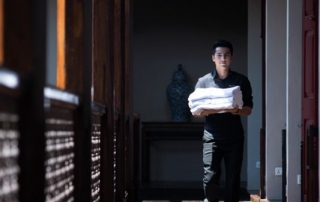 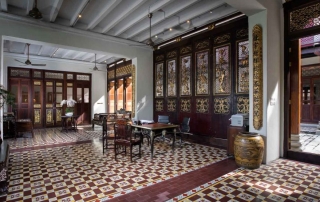 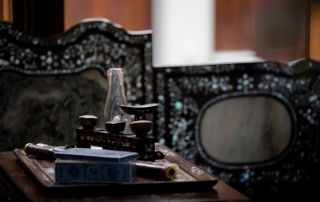 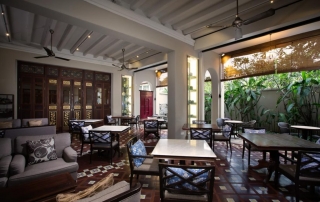 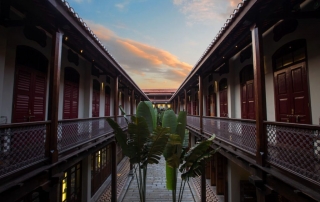 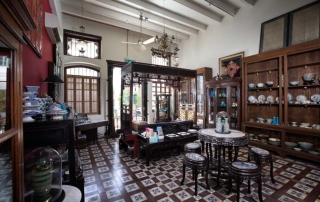 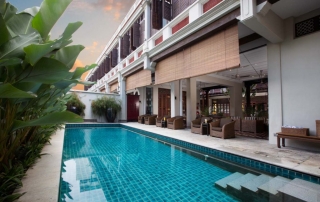 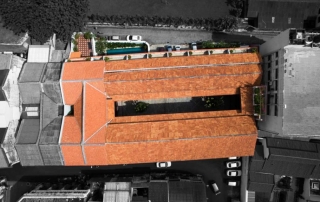 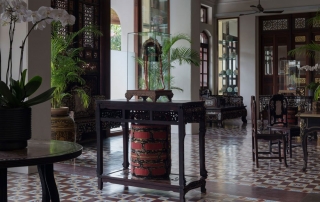 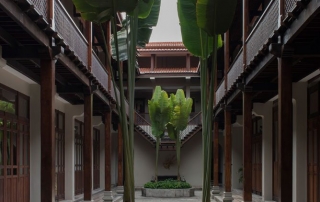 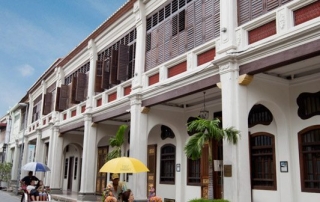